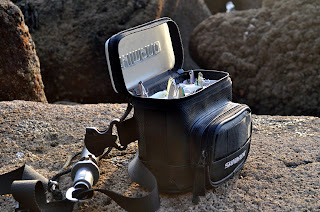 IMA lures, feed shallows, tide minnows etc. have all been catching a lot of bass for us this summer however two lures in particular have really stood out which are the Zonk Gataride and the Patchinko….

Below is a picture of the Zonk gataride in “cruizin blue” which has been the stand alone lure/lure of the moment/go to lure whatever you want to call it so far this season, especially when fishing off rock marks. When I got my hands on this lure last summer I was wondering what the hell was going on with the bib I didn’t use it that often as I generally fish in areas WHERE I THOUGHT were more suitable to shallower diving lures and areas which were not suitable for the zonk,…how I was wrong. This summer things have changed from talking to Cian who will barely use any other lure off rock marks it slowly started to sink in that I needed to fish this lure a bit more especially after seeing the countless big fish he was smashing on it. First of all I had to get out of the habit of lowering the rod tip to the water as the gateride does run that little bit deeper than your conventional shallow divers such as the feed shallow and tide minnows etc. Keeping the rod up will ensure the zonk fishes that little closer to the surface and can stop snags and losses and you can still add the extra action to the lure by sweeping the rod back when retrieving. When fishing in deep water I get the rod back down again and really work the lure. I mix up the retrieves when fishing this lure ranging from slow to a quiet quick retrieve, you should feel the lure working and vibrating through the rod as you retrieve it. I was out recently with a friend who was snorkelling and he said he could hear the lure underwater (rattling) the moment it hit the water which was almost 25 yards away, combine this noise with the vibrations you can feel through your rod and you can start to realise why this lure is so good.
This lure alone has accounted for the vast majority of bass I have caught this year off rock marks along the copper coast. However one word of caution, the hinged bib is fragile and fish hitting the lure and also hitting the lure into rocks may cause the bib to break, but we cannot complain as the lure was not designed to be fished in the areas we are fishing such as over rocks and bolders where accidents will inevitably happen and the bib will break. It may be fragile and I may have a stack of broken gatarides in the lure box but its not going to stop me using them…..they’re just too good. 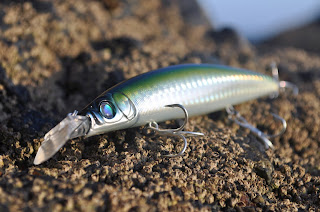 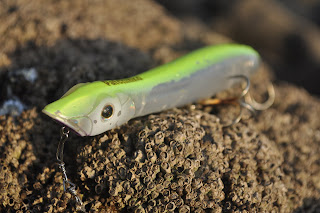 The Xorus patchinko (above in yellow) has also been taking a lot of fish (big bass) off the top….by far the most exciting way to catch bass. The trick to this lure is to get the head twitching from side to side, this can be achieved by raising the rod tip and twitching the patchinko back quickly if you’re doing it right it should come across the surface in a zig zag pattern. It can also be worked well be lowering the rod tip close to the water and moving the rod tip from side to side while retrieving which also achieves this zig zag pattern you want. I also like to make short stops/pauses when retrieving as fish may be following the lure and I have found that a sudden stop can sometimes induce a take (as is the case with alot of lures)….however with this lure they usually hit it before I have a chance to think about making a stop. Youtube yellow patchinko to see yourself just how effective this lure can be.

I had a couple of hour’s yesterday afternoon to head out for a quick session. At the moment the water is coloured along my usual marks which at times is a nightmare especially with the floating weed the recent easterly winds kindly dropped onto the copper coast. I went for a quick recce to the usual marks but could only find milky coloured water. A bit disheartened by the water clarity I decided to head to a mark I hadn’t fished for a couple of months where I thought the water might be clean. The only problem with this mark is that you don’t know how coloured the water is until you make the hike down to it. I arrived at the mark with high hopes of some clean water, but as soon as I arrived I could see that visibility must have only been 1 foot or 2 foot max…I was thinking to myself DISASTER!! I was very close to unclipping the lure and walking back to the car but I said Id have a few chucks….happy I did. Second or third cast I had a nice fish on the feed shallow, the areas I was fishing was full of bolders and snags a lure graveyard!! I decided Id try the feed shallow a lure which kept me away from the snags and which also leaves off a lot of vibration underwater with its great action,,, what I thought was needed to get the fishes attention in the murky water. Delighted with the fish I took a quick pic of the wee fella and slipped him back sure enough on the next cast had another fish, again on the feed shallow. Things went quiet for a while and just before heading home I hooked a decent fish when retrieving a tide minnow very slowly, this fish let me know he was on making long powerful runs on this occasion the fish won and I lost the fish when he decided to steam train off on his second run. No records were broken with the fish caught but I was delighted with the session and catching in conditions when I normally would have headed home.
Murky or coloured water has always put me off but again another lesson learned. The fish can certainly home in on your lure in murky conditions if you give them enough time to find it picking a lure with a lot of action i.e vibration which the fishes lateral lines will pick up straight away. 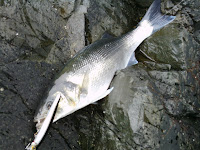 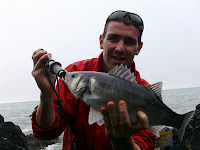 Posted by Absolute Fishing at 10:42 AM