I was lucky enough to spend a couple of hours yesterday with James MacSweeney on board his boat "Bass Bandit" in Cork harbour. Conditions were against us with a howling north easterly the fishing was going to be very hard and to be honest I was not too confident as we loaded up the boat in Monkstown for the off. 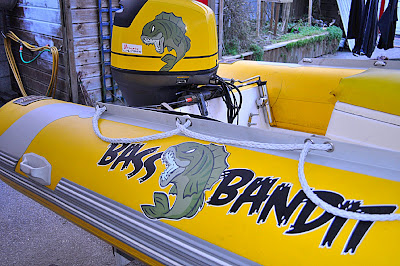 On our way to the first mark James showed me all the nooks and crannies that he knows very well all around the harbour where he has had some really nice specimen bass last season. There is some serious bass ground around cork harbour and Im already looking forward to getting down to fish some of these marks in summer.
Anyway we arrived at our first drift where James reckoned we would have a good chance of getting some cod on soft plastics. This sounded interesting as Id never had cod before on sp's....loads of things were running through my head like will this work? and will cod really give much of a fight or will it be like bringing in a dead weight? 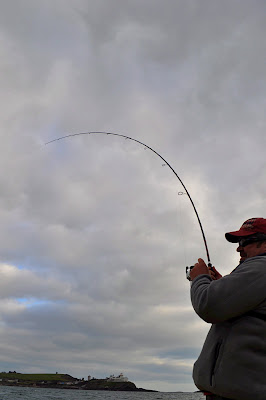 They really do hammer these soft plastics
Happily the questions I was asking myself were answered pretty quickly as I got my soft plastic bouncing on the bottom i felt a solid bite I struck and FISH ON!! and this continued on each drift after with a couple of double hook ups this really was curing the winter blues and the lack of bass around at the minute!!!
My injection was seriously tested by these smashing codling they ranged from 3-5lb and boy do they go..... a different fight to a bass but when these fish are hooked at a good depth they do not give up easily. As you try to bring them to the surface expect vicious head shaking and line being stripped off the reel when the cod go on long powerful runs....this is proper fishing for this time of the year.
We ended up with a some really nice cod and I managed to sneak out a nice pollack, James aslo got broke up by two seriously good fish, maybe a big pollack or big cod but whatever these fish were they went on huge runs thats simply could not be stopped. I suppose a good days fishing would not be complete without the "ones" that got away.
If you want to contact James you can reach him on james.macsweeney@yahoo.com , weather it be some cod on soft plastics in the next few months or bass on surface lures in the summer and autumn, the fishing that can be had in cork harbour is awesome.
Tight lines,
JamesB
Posted by Absolute Fishing at 12:45 PM