Well done to Ger Griffin who landed (and released) this specimen bass yesterday on lures. Ger was letting his jig flutter through a current when he hooked this fish. Coming in at 10.5lb on the boga it is Ger's personal best. A bait angler all his life, he took to lure fishing in a big way last season, its always nice to see the hard work paying off with a nice fish.
Well done again Ger on a cracking fish. 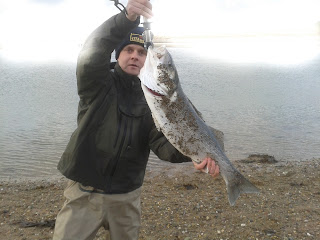 This fish swam off strongly, so she is still out there which is always nice to know... I cant say it enough how important it is to release these mature fish as they are the most valuable to the species due to the large number of eggs they can produce at spawning time.


Tight lines,
James.
Posted by Absolute Fishing at 10:31 AM