It is always nice to get a phone call from guys that come into the shop telling you how they smashed some bass, however not so nice when you were suppose to join them for the morning.....
Mark and Tony Phelan have taken to lure fishing in a big way and their hard work was rewarded during 2011 as they got out there and found some hidden away marks along the copper coast and smashed some very tidy fish on hard lures.
As the water temperature dropped the guys concentrated on fishing xlayers in moving water and had some good sessions up until Christmas. With the mild settled spell and some good tides the guys fished a tidal lagoon yesterday and concentrated on bouncing xlayers into a channel that was filling with the rising tide.
I wont lie it was hard getting the phonecall and hearing that their xlayers were in the water a matter of seconds before being hit by some very hungry bass. Here are some photos the guys send through. 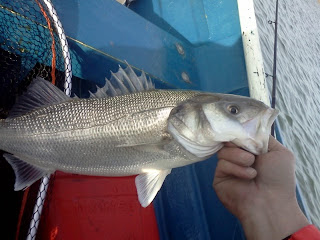 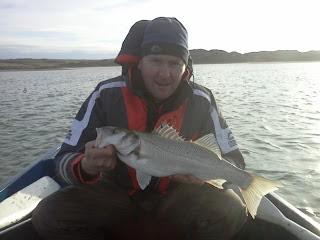 Tony with a nice January bass

They had 15 fish in total the best around the 5lb mark. Superb fishing for January, well done lads.


Gutted that I missed getting a few fish yesterday I headed out this morning before work. Fishing an xlayer into a current and letting it run downtide I had one schoolie and missed another before having to leave to come open the shop. So it seems there are plenty of fish around with this mild weather we are having, so dont pack up your lure gear just yet.
*On another note the shop will be closed on Sundays for the next few months opening again on Sundays when the season is back in full swing*

James.
Posted by Absolute Fishing at 11:01 AM