It has been a cracking week on the bass with a few sea trout making an appearance along the way. Since Sunday and this is no exaggeration between 5 guys fishing days when they could 87 bass have been landed.  Granted they were all schoolies it is great sport for January.
The area where we have been fishing is full of herring sprat at the moment as you can see below a sea trout  coughed up this herring sprat just after it was landed..... 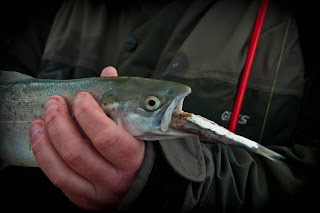 Using metals and trotting them through a current the bass where hitting hard as we jigged them through... 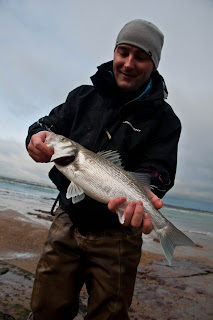 Double hook ups were the norm and it was constant action from the off. 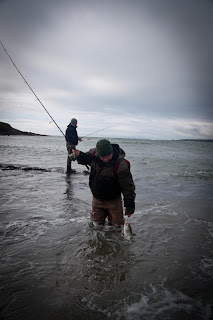 On Friday I brought a friend of mine lure fishing for the very first time, he landed four fin perfect bass and now has the lure bug bad. It is always great to see the face of a dyed in wool bait angler when he hooks a bass on lure gear....something tells me his bait gear might be gathering a bit of dust in the future. 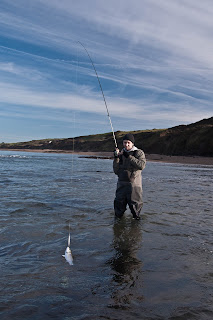 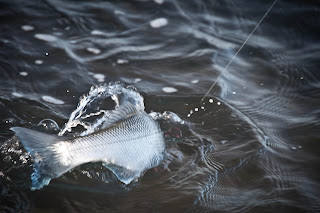 One that got away....
When fishing this area there are some nice sea trout in between the bass. Here is Pat with a nice sea tout coughing up a herrirng sprat. And only a few minutes a go Barry Howlin from Wexford just arrived into the shop with a picture of a 8lb sea trout which he caught on a Gt shad .... fish of a lifetime. Well done again Barry a super fish. 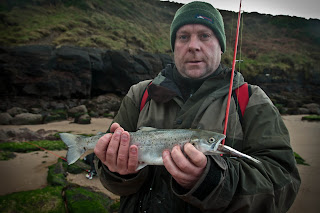 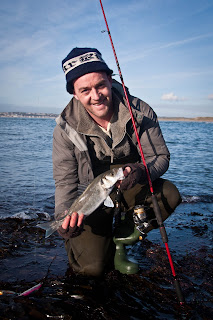 Eric with a nice schoolie caught on his beloved  jackson athlete
All in all it was great week and long may it last. I will do a blog post during the week on tactics and lures which worked well for us.
Just a reminder shop will be closed on Sundays for the next few months.
Tight lines,
James.
Posted by Absolute Fishing at 3:21 PM