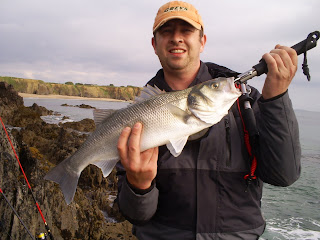 Well the lads have arrived and the fishathon has begun,

It has been non stop so far and I don't think that will let up with Mr Gilbey around , I don't think he ever sleeps. Today I am at work in the shop which is great as I got to sleep past 5am but still I would love to be out fishing with the lads . We kicked off Thursday morning with a great session -the amount of bass we saw was incredible. It was frustrating as all of the bass we were seeing were not turned on and not jumping on the hook it was hard work to hook up and get them to attack . At one stage for about an hour myself and Andy had a fish a cast turning on our surface lures but not hooking up.
We did manage a decent number of fish which was great but if we had hooked up with every fish that followed our lures it would have been close to 100 fish.
That evening we went back to the same mark where again Andy did the business on the z -claw and Trevor on the lucky craft Gunfish -pictures on Henry's blog.

The next day we tried a rock mark but it was just too calm -I really think you need a little bit of fizz in the water in rock marks to get them to switch on , so we moved back to where we knew there were fish . Of course we were a little late arriving and missed most of the tide but Paul and Henry managed to land the last 2 bass moving out using finesse fishing with plastics ( finesse seems to be the word of the week)

I will be out again this evening so I will keep ye posted.
Posted by Absolute Fishing at 10:00 AM