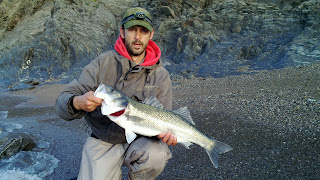 This settled weather is very nice but it is making fishing difficult . The water is gin clear and there is still plenty of bait fish around but in my opinion without that bit of fizz ( life in the water ) it is hard work fishing with lures . The bright sunshine and clear calm water give the fish too much opportunity to see the lure the line and you . Also I think with a bit of movement or surf they do not get as much time to think about attacking something if they don't have it straight away they could loose it in the next wave . Saying all this there are still some fish being caught and nice ones too.
Here is a little story that explains the catching of the fish above .
A few weeks back myself and Paul were fishing a mark , nothing new about that only that Paul lost a brand new Yellow Patchinko. That evening Marty Harrison and his friend Austin arrived into the shop just after fishing the same mark . Marty announced that he had found a Yellow Patchinko. When I informed him about Paul's loss we had a bit of a laugh and Marty was sure it was going to catch him fish but the lure obviously had bad luck attached to it because Marty did not get a touch on it . Marty and Austin were down again this week and again the Yellow Patchinko did nothing for Marty so he handed it to Austin and within five min the picture above explains what happened . Austin smashed this fish on Marty - Paul's Yellow Patchinko . Well done Austin what a great fish off the top . That lure certainly does not have bad luck for you.
Tried a bit of bait fishing with James earlier in the week which was nice and we managed a few fish nothing spectacular but very enjoyable . The biggest fish was 4lb and full of life when hooked but all of the fish landed were just plucking at the bait , it was like flounder bites . I do not know does the same go for bait fishing as lures , do they need that bit of fizz in the water to really switch them on or is there still just to much food in the water for them.
Just a quick reminder about the opening day Sunday the 24Th a week today from 1pm to 4pm . Everyone is welcome .It should be a good day and you never know you could win something .
Cian,
Posted by Absolute Fishing at 10:26 AM