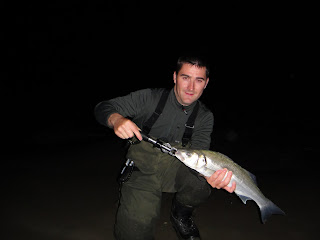 Big tides this week with plenty of fish around but I think next week will fish even better .
Over the last few years lure fishing I am noticing that the big tides are good but the following week as tides are dropping back down to 3.9 , 3.8, 3.7 are out fishing the bigger tides. So you can be sure that I will be out this week to try and get a few. This is only my opinion based on marks that I fish I am sure there are plenty of people out there with marks that fish better on the big tides.

Xlayers and yellow Patchinkos did the business
Managed to make it out on Thursday for a while with Paul and Keith from the Isle Of Man , now I did not expect much with the northerly wind over the last few days but we said we would give it a go. Off to an estuary with xlayers rigged up and ready to go . Soon as we got to the mark Paul had a fish first cast as you can imagine the excitement levels rose . Paul hooked up again 3 or 4 cast later and still not a touch for me and keith. The water was moving so fast with 7g heads we could not reach the bottom but clever Paul was using 14g heads so obviously me and keith switched over to the heavier weight . What follwed for the next hour and a half was some of the most exciting fun fishing that can be had . Sixteen fish were landed in total and many more dropped. After that we decided to give a rock mark a go for and hour on the start of the push , I was the first to hook up on the yellow Patchinko with a nice fish of around 5lb . Then keith had one just over four on the IMA Popkey . Of course Paul would not be out done and landed 2 fish on the yellow Patchinko . A great day out and glad I made the effort even with the northerly breeze.

All fish were released .
Posted by Absolute Fishing at 9:22 AM