The man was catching one way or another 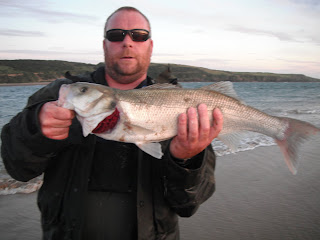 Saturday morning I got a phone call from Pat Connolly to inform me of the 5 fish he was just after landing one after another on the megabass xlayer. It has to be said I was jealous , stuck at work wanting to be out fishing but such is life. Pat called in to the shop after his session for a cup of tea and to fill me in on his outstanding mornings fishing. Its great to hear about guys getting out there putting in the effort and finding fish . Plans were made to get back to where Pat was fishing for the evening tide or as soon as as could get out of work.

All set up and ready to go

Myself ,Paul, Pat and Alan met up at around half six and headed for the mark . It has to be said hopes were high. On the walk to the mark the conversation was fishing , tackle and fishing. We arrived at the mark and were to early we could not get to where we wanted to be the wind was after picking up the tide was bigger it was a case of sit down and wait for the tide to drop off another bit , something which I am not great at . It was hard sitting there with the idea in our heads that just across the channel there were fish waiting to be caught . Pat was really itching to get across even more so than the rest of us as he knew what was on the other side , at one point I thought after a few failed attempts at crossing he was going to swim . Luckily he didn't have to and we made it across after a short wait.

Imagine the disappointment after crossing to discover we were completely weeded out and the xlayer was covered in weed before it hit the bottom. Gutted we struggled on for a while casting , praying that the weed would push on . The weed never moved it was there for the night . Next thing I look to my right and Pat is stuck in to a fish . By the time I went up to him the fish had been released. The usual questions followed . Was he any size ? What did you get him on?. The reply was around 7lb on a Patchinko . My reply was ya right a surface lure , I did not even bring a surface lure with me to this mark , didn't even consider it . Pat did and it paid off fair play to him a quality fish in extremely difficult conditions , adapted to to conditions and caught a quality fish.
As I have said before I will never stop learning . Well done Pat and thanks for the photo Alan.
Posted by Absolute Fishing at 10:01 AM