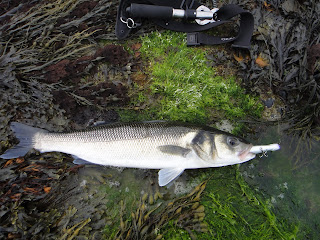 Myself Paul and lets call him K-Ten man( as he does not want his name mentioned for embarrassing reasons ) decided to head out last night at the last minute and how glad we were. We arrived at the mark at around 19.45 to be met by a group of turns picking sandeel off the surface. It was the start of the rise so there was very little water at the mark so surface lures were the order of the day. The yellow Patchinko was my first choice and third cast with a big splash I was on , heart pumping after such an aggressive attack I got the fish in a nice fish around 4lb out with the hooks and straight back . Next chuck a big boil behind the lure and another big splash to follow but the fish missed the lure , that didn't stop him though back he came again and devoured my lure a fish of about 5lb my biggest of the night . After that I had another 4 fish all between 2lb and 4lb over an hour or so . While all this was happening I was looking over at Paul across the rocks from me smashing fish as well also on the yellow Patchinko.Paul had five fish his biggest 7.5lb . It was just quality fun , as I have said before surface lure fishing is so exciting it really gets me going .

Now we get to K-Ten man , he was not having a great night at the start which just happens many a night everyone around me is smashing fish and I cant hook up and then bang he smashed a fish on his favorite lure you guessed it the K-TEN . The fish was landed a nice fish again around the 4lb mark. It was the unhooking where the problem arose . As K-Ten man was unhooking his fish it was still full of beans thrashing around and shaking its head and then a treble in the finger while the fish is still on the other treble jumping around . We got the fish off and released and jumped off the rock we were on to the shore to have a look at the damage done. We considered our options cut the hook and push it through rip it out . We decided on cutting the hook , this did not go so well as the pliers would not go through the hook and all we did was cause more discomfort . So K-Ten man decided to try rip it out approach this to failed as he yanked on the treble it did not budge .So the decision was made off to the hospital K-Ten attached. After a five and a half hour wait the hook was cut out of the finger and home for four in the morn. The main thing is K-Ten man is ok , the fish will still be there tonight so its back out again if I can stay awake .

Posted by Absolute Fishing at 2:44 PM